You are here: Home / Mystery/Suspense / Sweet As Murder by Patricia M Muhammad 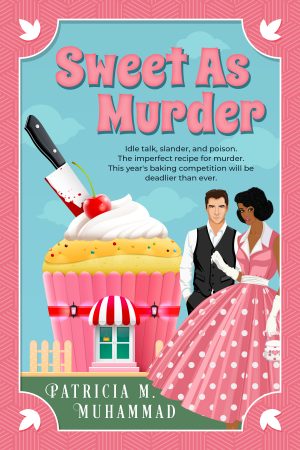 How Did You Come up With Your Characters?
I tend to write characters of multi-racial backgrounds and/or in interracial relationships. This third mystery/detective novel was no different. As for the form, I think Wilhemina Dankworth and her husband Charles display more and more of their personalities as the plot develops. Both are inter-related and to some extent interdependent.

Book Sample
“Ladies!” Dankworth said. She heard some 'ooos' and 'umphs'. “Has anyone considered that we may be able to leave from the stage? Who knows about this place the most?” Another woman about the same age as Dorothy stepped forward as Wilhemina stood beside Natalie, hoping to prevent her verbal exchange from escalating further. Natalie closed her eyes briefly to compose herself. None had expected such a turn in the first day of the baking competition. Natalie still could not explain why she decided to go near the corpse. Perhaps it was the first time she had been near death before. Dorothy and Eudora were of a different sort, impervious to most human suffering, but Dorothy was the worst of the bunch. Natalie thought Dankworth's offer a palatable escape, even if momentarily, from the others. She anxiously waited to accompany Wilhemina.
“Yes, I know about this building. The stage is rarely used by the Society, but sometimes they rent this hall to others who wish to do community plays.” The woman scratched her tilted head with a curled finger as Dankworth's eyes darted from side to side, wondering if she had anything useful to share. Death affected her more than she had expected as well. “As a matter of fact—”
“Well what is it?” Eudora said. The woman ignored her urging. She remembered an exit but not quite where it was. There was too much pressure being placed on her.
“Let the woman think!” said another. Several moments passed. Marceline still stood at the main door. She slowly turned it to her left, but could not get the knob to move fully in that direction like before. Marceline thought to step away, but she couldn't. She tried to remove her hand, but was unable to. Dankworth's guide was stuck more than the others. She swallowed. Marceline then looked down. No one was telling her anything. No one spoke before in words that she could understand. Not one woman in that auditorium could empathize with what she was dealing with. She did not wish to make a scene. Marceline relaxed her hand. It was of no use. For now, she and the door were becoming one.
“Get out while you can!” Arnold mumbled in his sleep. This time there was no nurse present. Dr. Tate heeded his patient's suggestion with the necessary respect it deserved. Yet he was not to check Arnold's current status for hours. Arnold tossed himself in the opposite direction and now faced the door. His eyes were heavily shut. He wondered if he was sleeping. Whatever state that he was in, Arnold could see the young woman clearly. Her skin was of mildly steeped tea, her hair a dark black and her eyes of a deep brown hue. For him to describe the young woman to anyone would not be sufficient detail. Yet, Dr. Tate could see what Arnold saw, even if he hadn't right then in his patient's hospital room at the time of his request.
“Stacey, hold any calls, except emergencies,” Dr. Tate said. Before she could answer, he hung up the receiver of his all black phone and flicked the fingers of his right hand outward. He stared down at the small stack of patient papers settled in the middle of his desk. The words appeared jumbled as he recalled what Arnold instructed. Francis looked at his ring. Arnold did know who he was, not by familiar acquaintance, but by a certain structure that they were never to speak candidly about. He finally looked up from his desk and grabbed his pen. He tapped the center of the papers again. Dr. Tate then looked to the wall to the right of his office. He stared at his framed degrees and certifications. He did earn the right to be called doctor. Francis was among the most qualified of his class. Yet this was not enough for him. He sought a greater door, and when he called for it, it swung wide open beckoning him to enter. Francis made haste. He did ponder the long-term. For so long he had not been impacted. Arnold's request seemed not as great a task considering all of the other stories he was not supposed to hear. Dr. Tate now only had to figure out whom he was to protect. There were plenty of young women, even intelligent ones at the baking competition. Arnold had now assigned him effectually as a guardian to a complete stranger. Francis wondered how he would effectuate protecting his charge, especially with all of his professional responsibilities. How would he explain his presence? He had to be sure not to make a mistake. The door to his future, in every form could be closed to him forever.

Author Bio:
Patricia M. Muhammad is an American fiction author of crossover contemporary romance/science fiction, science fiction/fantasy, mystery and historical romance genres. She has currently written 22 novels. She is currently working on her next book manuscript. Before penning fiction, Patricia emerged as an international legal history scholar and academic author, focusing on human rights, international law and restorative justice. She has currently written and published a combination of 23 research papers and academic book reviews in these subject areas. Her work has appeared in the American University International Law Review, Columbia Journal of Race and Law, the Willamette Journal of International Law and Public Policy as well as the New York History Journal. Her non-fiction writing has been cited dozens of times in various respectable academic journals.