You are here: Home / Bargain Books Under $3 / The Love That Dare Not Speak Its Name by Fiza Pathan 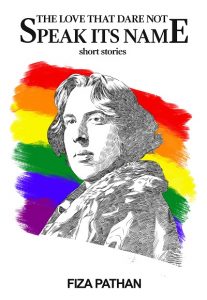 The Love That Dare Not Speak Its Name by Fiza Pathan

The Love That Dare Not Speak Its Name by Fiza Pathan is a collection of twenty-one original short stories, each centered on some aspect of the social, cultural, psychological and emotional issues facing the LGBTQIA community in the world today. False prejudice has blighted much of society’s sensitivity to what is necessarily a human rights issue. Ignorance has compounded it. What if you, as a parent or a family member, are faced with this “coming out” issue? Are you aware what each term in this acronym LGBTQIA really means? Are you aware of the emotional and psychological damage you do to your loved one when you fail to understand and reject their perspective of love, sex and acceptance?
Understanding the implications of the above, the author after months of research has crafted these stories based on actual conditions existing in different countries of the world. You will meet Rocky in “(A)sexual Story,” the psychiatrist Dr. Timothy in “Fix It,” and Jasmine and Randy in “Human Work of Art.” You will learn about DSD—Dysfunction Sexual Disorder in “Isher,” why Bangkok is called the “Kathoey Paradise,” shudder at the public repression of gays by ISIS in Raqqa and the dichotomy that exists in Iran. You will revel at the miracle you witness in “Topanga,” cry for Sameera in “The Girl’s Bathroom,” and be educated in “The Gay Truth.”
And in all these stories and many more you will learn that every human being suffers like you do and rejoices as you do, and deserves the right to choose how he or she should live their life, however different we perceive them to be.

What Inspired You to Write Your Book?
I had the honor to be interviewed by director Reshel Shah Kapoor, who knew of my interest in transgenders, for her award-winning documentary, Black Sheep—A Journey of Friendship, Family, and Fate, which narrates the heartbreaking journey of the hijras, or kinnars, who belong to a community in Mumbai. I participated in the one-day orientation workshop conducted for them. I found them warm and human, maybe even more human than you and I. The urge to take the story forward led me to research on their origin and life. But the life stories shared by the LGBTQIA people around the world was even more heartwrenching. I learned, in addition to other things, that in Jamaica homosexuals are forced to live in sewers. And in some countries which live in denial, disclosure of the names of homosexuals results in their being lynched or murdered either by the government or by their family members, who do so to avoid repercussions. Then came the pogrom against the LGBT in Raqqa and Chechnya—and the world, by and large, kept quiet. I have picked up my pen to write their stories, albeit in fiction, as best I can. For the revered Master, Jesus, once said: “Judge not, that you be not judged. For with what judgment you judge, you will be judged; and with the measure you use, it will be measured back to you.” I prefer living by his words to that of the world’s.

How Did You Come up With Your Characters?
I spent nine months researching, viewed shared videos on YouTube, read books on the subject.

Book Sample
The Love That Dare Not Speak Its Name