You are here: Home / Bargain Books Under $3 / The Princelings of the East by Jemima Pett 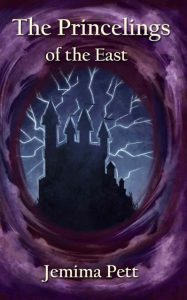 The Princelings of the East by Jemima Pett

The first book of the Princelings of the East series introduces us to Princelings George and Fred.  Imagine them scurrying around the castle using secret passages, carrying out scientific experiments that occasionally blow up in their faces, or quaffing ale at their favourite tavern.

But there is trouble in their world.  They may not use much energy, but when they do, it is usually for important occasions.   Energy draining to a halt to ruin the King’s Birthday celebrations is enough to send the king at Castle in the Marsh into a rage, and demand that everyone cease and desist from using it.  George’s latest machine is destroyed; their world looks to be falling apart.  So who better to go and solve the problem of this energy drain than the Princelings themselves?

Leaving the security of their Castle is a big step into the unknown for these boys, and they soon meet strangers, some of whom are stranger than others.  Who to trust?  Prince Lupin, so suave and sophisticated, with so many hangers-on fawning at his feet?  The businessman, Hugo, who seems so smooth and worldly, yet has an air of deceit about him?  The young barkeeper, Victor, always bustling around and never bothering to string a sentence together when three words will do, unless for royalty?  And that’s just Fred’s problem, since he has irritatingly lost touch with George in the darkness of the strange tunnel that appeared from nowhere in the corner of their room.

Meanwhile George seems to have been transported to another world, full of hustle, bustle and shining towers.  Where, or when, is he?  How come these strangers know so much more about his reputation than he does himself?  And will he manage to escape being thrown into a dungeon or killed by an assassin?

What Inspired You to Write Your Book?
I was playing a game with some other pet lovers, telling stories which we continued on from each other. Somehow we got into a story where two guinea pigs went down a hole and found another world which ran on strawberry juice. That was the inspiration for the first book, which I immediately conceived as a trilogy, with the book titles as set out, the second one being a pirate adventure, and the third a lost city with a secret. Then I discovered that the characters were in charge of the story, and all I had to do was write it down. In the usual manner, my friends read the stories and suggested I publish them. It all sounded so easy, but of course, it wasn't. But we got there in the end.

How Did You Come up With Your Characters?
If you don't believe that animals have personalities, look away now. Nearly all the characters in the first book are based on my guinea pigs, or those of my friends. My own pets, Fred, George, Victor, Hugo and their successors, are easy enough to interpret into the books. Those of my friends start out based on how their carers have described them but become my own characters. I'm pleased that their carers read the books and like the interpretation, and since guinea pigs are not long-lived animals, it becomes a pleasing memory for most of us. Although it is hard to pick the villains.

Book Sample
“Uncle Vladimir has ordered everyone to attend in the Great Hall at sunset for an announcement,” Fred said, with a grimace. “So I think we’d better slide in at the back to hear what’s going on.”

George nodded. They had returned to the cubbyhole behind Vlad’s apartments. After a few minutes of fidgeting, Fred said he was going out to find out what was going on. George was feeling miserable, so he stayed there. He’d spent a little time scribbling notes, setting down what he’d learned from the ruined wind engine, and then found himself sketching something that might help Fred map the wind around the castle. As grief over one machine turned to excitement over a new project, George bucked up. Fred had returned from his investigations just in time to stop him building something new on the spot.

George explained to Fred his sketches for a wind-mapping machine, and Fred spent a little time getting excited and imagining all sorts of grand designs that could follow on, but this was obviously not going to be work to start one late afternoon. As sunset drew near, the boys made their way down to the Great Hall. They sidled into the Great Hall just as Vlad walked up to the front and onto a low raised platform. He turned to face them and cleared his throat.

“Thank you all for coming,” he said politely. “You are all aware that the King has been losing Energy recently. The shambles of the Birthday Gathering was shameful and everyone who contributed to our disgrace has been exiled. We have decided that the Energy Drain has to stop and therefore everyone here must conserve Energy. Anyone found using Energy without a permit will be severely dealt with.”

A buzz went round the Hall as various people asked their neighbours what the nature of ‘severely dealt with’ might mean. Vladimir paused and looked at them sternly, and the noise subsided.

“You are also to be watchful. Energy Eaters have been seen in the neighbourhood! Drive them out! Kill them on sight! Do not rest until we have driven them from our midst! That is all.” And he strode from the platform and disappeared through a narrow doorway.

Fred and George made an equally quick exit. They made a beeline for their warm and comfortable cubbyhole. They rested on some tapestry cushions, acquired after the disastrous birthday gathering, and discussed the meaning of the pronouncement.

“Energy eaters – that’s daft,” said Fred. “Those little wormy things are around again, they always are at this time of year.”

“Exactly so,” said George, “and I am sure they make the little lights they carry from the food they eat. They hardly ever come in the castle anyway.”

“Is it a bluff, do you think? Uncle Vlad can’t possible think the wormy things are really Energy eaters, can he?”

“I don’t think so, but grandfather might. He is rather superstitious.”

“There must be other castles affected by this Energy Drain,” Fred mused. “We don’t even know how many castles there are in this land.” They had heard of one or two, but they hadn’t even travelled to Castle Wash.

“I don’t know. We need to get messages to other castles ourselves, to gather information from them. If only we knew some people there whom we could trust.”

“What we need,” said Fred, “is a secret passage that connects with the other castles – a tube network.”

There was a sudden groaning noise and a dreadful shaking of the floor. A large hole appeared in the corner of the room. George went over to look at it.

“It appears to be a tunnel of some sort. There are stairs leading down into it coming out of the rock.”

“It’s never been there before…” Fred seemed stunned.

“I think you asked for it, and the castle provided you with one,” George replied in a matter-of-fact tone. “Have you ever specifically said that you needed something before and it turned up?”

“Well,” said Fred slowly, “I think I have said I need a drink of water before now … and there was usually a jug or a tap round the next corner. But I don’t often say I need something – because I don’t, not often, anyway.”

George nodded. They tended to make do with what they had, and use their wits for most other things. And Fred wouldn’t say he needed something, he would say “I could do with” something that could achieve his desire, not “I need it”.

“Well,” George said, “Are we going to see whether this tunnel connects with other castles, or shall we just sit and look at it?”

Fred sat staring at the tunnel, lost in thought. George waited. This might take a while. He could hear soft sounds of crackling flames in the fire on the other side of the wall, and in the distance the occasional pitter-patter of footsteps echoing down the corridors. He wondered what would happen if they ventured out of this castle into the tunnels. When he had been out in the marshes, he’d never gone a long way from home; the castle was always visible in the distance, light glinting on its spires. He’d never been out overnight, either. He identified a strange feeling inside him. They might be on the edge of a Great Adventure, but he wasn’t sure he wouldn’t rather be safely tucked up in bed.

Fred stirred. “We need to go and investigate this Great Energy Drain. We must find out whether it is a widespread phenomenon, and whether the causes are known.”

George nodded; this was elementary procedure for an investigation. “And then?”

“And then, we shall come up with some ideas for how to solve it.”

“Good idea!” George knew that you can never know exactly how you are going to do something until you have made the preliminary investigation and tested out a few theories. But the aim was set, and all they had to do now was decide… to go or not to go?

So they looked at each other, then jumped down the hole onto the steps and down into the tunnel, not knowing where it would all end.