You are here: Home / Historical / The Scarlet Forest: A Tale of Robin Hood by A. E. Chandler 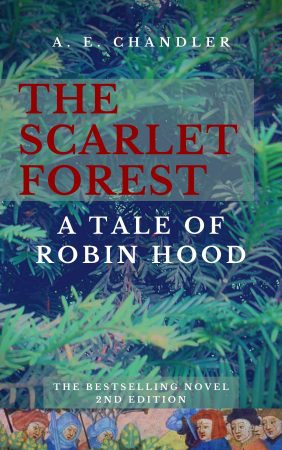 How Did You Come up With Your Characters?
Robin Hood's character goes back more to his satirical medieval roots, when he stood for the ideal social order, while Marian – whose character was added in modern times – takes on the role of the rebel, which is also a modern idea that was added to the legend. I also wanted to develop Will Stutely's character more. Will is a yeoman in the novel – like the medieval Robin Hood, before he was saddled with the earldom of Huntingdon – and I enjoyed exploring how he would interact with the high-ranking Maid Marian, walking that tightrope between social inferior and lifelong friend.

Book Sample
The monk astride Robin leapt from his mount, pinning the outlaw against the next monk’s horse with a dagger to his throat.

“Be easy, friend.” The horse halted, and Robin stood with his hands raised, to pacify or to snatch for the dagger. “I mean no harm, and only wished to succour the church’s chosen.”

“Thou art no friend, however little harm thou meanest.”

Robin squinted at the voice, staring up at the tall monk.

The man took his empty hand from the outlaw’s shoulder a moment to push back his hood.

Robin stared wider. “Baron Fitzwalter!” He smiled. “Sir, welcome with all mine heart to the greenwood.”

The dagger stayed at his throat. All the monks halted.

The baron, his dark brown beard unable to hide the tightness of his jaw, glared at Robin. “Where is my daughter?”

Author Bio:
A. E. Chandler holds a Master of Arts with Merit from the University of Nottingham, where she wrote her dissertation on the social history behind Robin Hood. Living in England, and travelling in Europe, Asia, and Africa have also contributed to her stories and characters – she has been chased by a camel rider through the Sahara Desert, skated down a volcano in Sicily, and gotten unintentionally locked inside of a medieval prison in France. Chandler has had short stories, poetry, and articles published, in addition to a book of collected non-fiction entitled Into the World, her humour book Questionable Quizzes, and the bestselling historical novel The Scarlet Forest: A Tale of Robin Hood. Currently, she is a visiting expert with the Glenbow Museum’s military collection, and writes "Original History": books about little-known people or events surrounding popular history.