You are here: Home / Fiction / The Wicked West by Stuart Gustafson 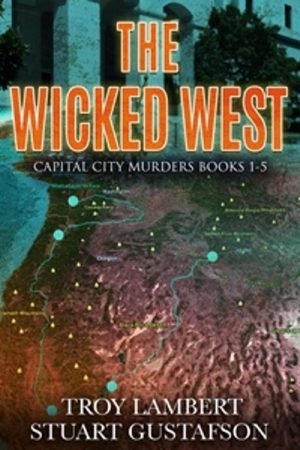 The Wicked West is a compilation of Books 1-5 (plus the Introduction to the main series character) in the Capital City Murders series of novellas. The series begins in Olympia, Washington, then to Salem, Oregon, Sacramento, California, Carson City, Nevada, and Boise, Idaho.
In each story, Nick O’Flannigan is on a one-year assignment to visit each state capital and submit photographs of the capitol building and surrounding areas to a major magazine. There’s been a murder, and Nick’s keen eye for details pulls him onto the case.
Will this involvement impact his assignment or his relationships?

What Inspired You to Write Your Book?
After reading some of Sue Grafton's "Alphabet" mysteries, I wondered if I could craft a series of books set in the U.S. state capitals. Knowing what it takes to write full-length novels, I settled on writing novellas. With my co-author Troy Lambert we are underway on the fifty stories, starting in the Pacific Northwest state of Washington, working our way east, then finishing in Alaska and Hawai'i.

How Did You Come up With Your Characters?
Nick O'Flannigan is the key character in the series who's on assignment to visit each state capital to photograph the capitol building and other areas for a major magazine. We wanted someone who would stand out from the crowd (he's six-foot-six with bushy reddish-orange hair) so he's recognized by some people as he moves to a new capital city each week.
Other characters were created to fit in with Nick, the story line, and the long-term goal for the 50-book series. He meets Sandra in book 2; she helps him in book 3, and perhaps there's a relations about to be started.

Author Bio:
Stuart Gustafson took early retirement from high-tech in 2007 so he could spend more time traveling, time with his Mom (then aged 90), and time writing. In all he has written fifteen books, including four full-length novels. He's also had a series of non-fiction relationship books (three of them) nationally published. Some of the stories from his very first book "Parables for Life in the 21st Century" have been adapted for use in elementary text and workbooks in the country of Trinidad and Tobago.
Stuart is currently busy as the creator and co-author of the Capital City Murders series, a series of novellas set in each U.S. state capital, delivering one book a month for fifty months!