You are here: Home / Archives for Luana Ehrlich

When CIA operative Titus Ray has an unexpected encounter with a Jihadi terrorist while he and Nikki are on their honeymoon in Morocco, he assumes it’s a coincidence, but when they travel to Israel for the second half of their honeymoon, and Titus encounters him again, he contacts his CIA handler. Within days, Titus is on his way to Iraq to prevent the assassination of a high-profile government official. Is the assassin’s target the Iraqi Prime Minister or could the visiting U.S. President be in his crosshairs? Could it be someone else? Could it be Titus?

END_OF_DOCUMENT_TOKEN_TO_BE_REPLACED

CIA intelligence operative, Titus Ray, arrives in Washington, D.C. on the day a terrorist enters the Washington Navy Yard and murders five people. Convinced the incident is connected to a Hezbollah plot to use chemical weapons on an American city, Titus jeopardizes his own career to interrogate the killer and learn the truth.

The killer’s confession reveals a deep-cover Iranian terrorist operating in Washington and sends Titus on an intelligence operation spanning two continents and leading to the discovery of an Iranian general obsessed with destroying the nation’s capital.

As time runs out, Titus engages the enemy in a treacherous game of cat and mouse to save the lives of thousands and defeat the terrorists. Can his faith sustain him as he faces his greatest challenge yet? Is he willing to lose Nikki to save his country?

END_OF_DOCUMENT_TOKEN_TO_BE_REPLACED 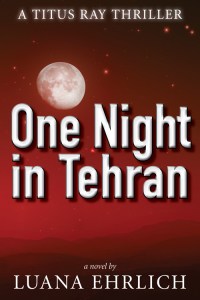 Bargain! $0.99 Book I in the Titus Ray Thriller Series.

Is the assassin stalking him connected to the mysterious Iranian couple he meets in Oklahoma? Can Detective Nikki Saxon be trusted with his secrets?

In Tehran, while hiding out from the Iranian secret police, CIA intelligence officer, Titus Ray, finds shelter with a group of Iranian Christians. Compelled by their unwavering faith, the battle-hardened, covert operative becomes a believer before he manages to escape to Turkey.

When he returns to the States, he discovers his Iranian mission failed because of political infighting within the Agency. In a hot-tempered outburst, he delivers a scathing indictment against the Deputy Director of Operations, and the deputy forces Titus to take a year’s medical leave in Oklahoma.

Before leaving Langley, however, he discovers a Hezbollah hit man has targeted him for assassination. Now, while trying to figure out what it means to be a follower of Christ, he must decide if the Iranian couple he meets in Oklahoma has ties to the man who’s trying to kill him, and if Nikki Saxon, a beautiful local detective, can be trusted with his secrets.

Buy One Night in Tehran Here