You are here: Home / Archives for Spicy Romance 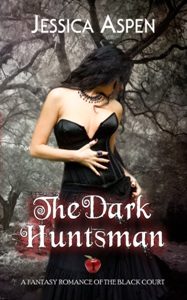 The Dark Huntsman by Jessica Aspen

An evil queen, a dangerous man, and a witch, tangled together in a tale of Snow White…
Desperate to save the last of her family from the murderous Faery Queen, Trina Mac Elvy weaves a spell of entrapment. But instead of a common soldier, the queen has released the Dark Huntsman, a full blooded fae with lethal powers.
Caged for treason, Logan Ni Brennan, is ready to do anything to win free of the manipulative queen, even if it includes running a last errand for her…murdering a witch. The sight of Trina, ready to fight despite the odds, gives him another option: use the witch as a chess piece, put the queen’s son on the throne, and bring down the queen forever.
As the queen slides into insanity and her closest advisor makes plans to succeed to the throne, Logan secrets Trina away in the enchanted forest and makes a decisive move in his dangerous game of manipulation. But the gaming tables of fate turn on him, and when Trina’s life is threatened he discovers he risks more than his freedom…he risks his heart.