You are here: Home / Horror / The Condemned by Jesse Rosenbaum 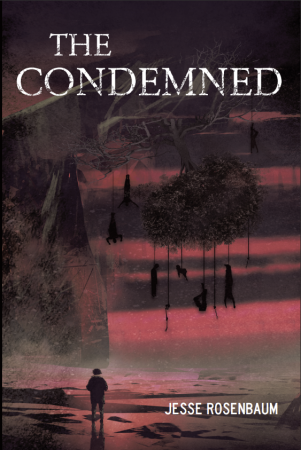 Fulton Books author Jesse Rosenbaum has completed his most recent book “The Condemned”: a chilling novel that follows Michael and his endless strings of nightmares that horrify and push him to the brink. With each passing dream, he gets closer to the dark figure who has brought him to these horrific dreamscapes while seeking answers and unraveling the mystery of his role in this dark figure’s plot.

Jesse writes, “I keep having these dreams. At first, I figured it was stress, being that it’s my last semester in college, but they just keep happening. The places I find myself…the things I see are just horrific. I see all these people, many of which are crying out, screaming in agony. The others that I see are dead, displayed or lying in gruesome and grotesque ways that make my stomach turn. There is this overwhelming sense of despair that just weighs down on me. The hopelessness that I feel from these tortured people is thick in the air and clings to my body.

In every dream, I see this…figure. I’m drawn to it by some unknown desire, but regardless of how close I try and get, I can’t make out what it looks like. It’s wrapped in shadows, hidden from the light. And each time I see it, my mind screams to run, but despite my best efforts, I can’t. I stand there frozen with fear, surrounded by all this anguish, torture, and death, but this figure’s voice cuts through all the misery. Its voice is clear and surprisingly soothing as it says to me, ‘I will become of your world.’ With each dream, I feel this figure pull me closer. It needs me for something, but what? Why does it keep showing me these things?”

Published by Fulton Books, Jesse Rosenbaum’s book is a suspenseful tale that will draw readers into the shadows of Michael’s nightmares and where they further take him. Here, in his story, Michael will face a bunch of encounters that could change his life. Will one of these encounters save him from his long, unending agony?

Targeted Age Group:: 13 and up

What Inspired You to Write Your Book?
I read Richard Matheson's, I Am Legend, when I was twenty and his story along with his selection of short stories, inspired me to want to elevate my love of writing poetry to writing something more long form. Over the next year I started to write, The Condemned. That was back in 2001, but two years later, my great friend Mark, was killed by a drunk driver. He and I were working together on other projects and his death caused me to stop writing. Doing it without him felt hollow. It wasn't until 2019 that I finally decided to try and get this story out into the world. With my publisher, Fulton Book's help, I have finally achieved my dream of becoming a published author.

How Did You Come up With Your Characters?
My characters were based off of my friends and other people I met in and outside of college as I was a sophomore in college when I started writing The Condemned. The main character, Michael, was how I channeled a lot of myself along with some personal struggles that I was facing at the time. Michael's friend Tom was an amalgamation of my closest friends at the time.

Book Sample
This time, Michael’s dream brought him to dunes of snow and mountains of ice. He walked along a path and saw the bodies of men and women of all ages lying face down and up in the snow. Some were frozen stiff like they had been there for a long time and even some with the look of fear frozen on their face. He took notice of all this, but he didn’t recall seeing any children. Some of these people seemed to have simply frozen to death, while others appear to have been slaughtered and were laying in pieces. There were spots of red snow across the ground. As he continued along, he saw something moving on some of the bodies lying near the path that he was walking on. On close inspection, he saw that spiders were laying eggs in the open wounds of many of the bodies. He felt sick when he saw the eggs hatching in one man’s exposed throat. They crawled out the wound and moved down his corpse quickly as if the spiders were moving across the body like a thick fog rolling along that hugged the ground. He watched on as some of the spiders stayed on the bodies and began to eat the flesh in the open wounds. Others scattered off into the snow.
Michael continued onward. Then he noticed the trees in the distance. As he came closer, he noticed that there were yet again limbs hanging in trees and various human organs lying at the roots below. He couldn’t identify them all, but he could tell what the intestines, lungs, and heart looked like. The cold kept the smell from being very strong, but even then, it wasn’t enough, he could still smell the decay and rot; the iron in the blood spilled was fragrant as well. The branches of the tree were covered in blood, but it wasn’t dripping down to the ground. He felt his stomach spasm at the sight of it all. His face cringed as he turned away. He hunched over and began spitting out the warm saliva that was now forming in his mouth in an effort to stop the vomit from coming. He wiped his face and caught his breath.
“Where am I?” Michael shouted as he stood up.
Then he heard the figure’s voice, “You are in the place where the lost souls dwell.”
This time, he could definitely tell that it was a man’s voice. The figure suddenly appeared and was about ten feet from Michael, if he had to guess. Even at that distance, he couldn’t make out the figure’s face. The man stood there, as once again the light did not touch upon his face, but his clothes seemed just a bit more visible this time. He could tell that he seemed to be shrouded in a garment made up of various shreds and patches of dark black and grey fabric. It covered him entirely like a cloak, which made it very difficult for Michael to make out his body structure. However, Michael could tell that the man was about six inches taller than he was, which would make him about six feet, four inches tall.
Michael responded, “Lost souls? You mean purgatory?”
“If that is what you wish to call it, Michael,” the figure replied.
Michael stared in surprise. “How did you know my name?” his voice was full of inquisition and confusion.
“I know a lot about you, Michael. I have been watching you for quite some time now.”
“You’ve been watching me? Why me?” Michael’s voice cracked at the end. Now he was not only confused but frightened as well. He tried to move closer to the figure, but when he took one step, it was as if he had become frozen. He was filled with a feeling of utter dread. He was so scared he began to urinate on himself.
The dark figure replied, “I need you to help me. To help me leave this accursed place, I do not belong here. I was never meant to be here. I shall become of your world.”
Michael felt the warm liquid fear running down his leg. “I-I don’t understand.”
“In time, I will help you understand, but for now, you must go.”
Before Michael had a chance to respond, he woke up back in his bed, but this time, he wasn’t sweating, and he wasn’t out of breath, but he jumped out of bed suddenly with a sound of annoyance. His bed was soaked in urine.

Author Bio:
I was born in Dunellen, New Jersey, raised in Green Brook, New Jersey and I now live in Vero Beach, Florida.

To my earliest recollection, I have had a love for horror since I was two years old. My parents, for some reason, used to let me watch Stanley Kubrick film of Stephen King's 'The Shining'. I used to watch that tape over and over. They probably regretted that decision when one day when I was two or three, I put a yellow plastic baseball bat through the back window and said, "Mommy, I'm home!"

I loved to read as a child and spent a lot of time in the library researching the paranormal and supernatural. In high school, during my sophomore year, I started to write poetry due to a class assignment. I wrote a lot of poetry through high school into college, but had wanted to do something more.

By the year 2000, I had decided that I wanted to try to write a story like one of my favorite authors Richard Matheson or Stephen King. My debut novel, The Condemned, is that story. Shortly after that decision, in 2001 I had met a friend in college, who's name was Mark. We connected immediately and shared a love of writing. We worked on a few projects together, which sadly never came to fruition because in 2003, Mark was killed by a drunk driver. From there the wind was just completely taken out of my sails for writing. I would dabble in it over the years that followed, but it never felt right to me, not without my friend.

In 2019, I decided I was going to finally do something with my stories, so here we are. I'm very happy and honored to share my stories with you all. I hope you enjoy reading them as much as I have writing them.