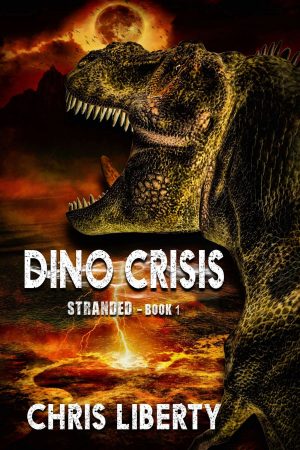 A group of researchers led by Dr. Emmanuel Hernandez gains a permit to visit the quarantined Ilha da Morte to prove either the truth or the fallacy of the whispered rumors of a giant lizard that lurks within the dark, unexplored jungles.

One problem after another plagues their mission, starting with their boat sinking during the landing, followed immediately by the loss of their satellite phone and the death of a team member. The expedition, now cut off from the world, takes a more dangerous turn when hooting and roaring in the night reveals not only that the animal they seek is real, but that there’s more than one.

And they come closer each night.

The creatures soon prove to be the least of the team’s problems after encountering another group intent on keeping the island–and everything on it–secret from the rest of the world, even if they have to kill to accomplish it.

What Inspired You to Write Your Book?
I've loved dinosaur horror books like Jurassic Park and books with a treasure aspect like Treasure Island, so that's how I came up with my book

How Did You Come up With Your Characters?
As soon as the thought for my book appeared in my mind, so did the characters, so they were pretty much there as soon as I thought of the story

Book Sample
A vocal rattle emanated from the woods, answering the question. It was the same growl that clattered through his head all night.

Emmanuel squinted through the late afternoon sun at the tree line, then he did a double take before dropping his cup. “My God! They followed us.”

Scar’s pack charged from the edge of the woodland, jumping yards with each bound.

“Those are utahraptors. If they catch us, we’re dead!” Lance gasped.

Tex aimed his gun. “I already caught on to that, kid.”

“Run!” Emmanuel dashed into the opposite forest, shepherding his team forward. Uneven huffs dried his throat as he tore away branches and plowed through a wall of briars.

Tex fired a shot, and a raptor collapsed with a bullet in the throat. “Eat shit, fucker!”

Chandra raced ahead, leaping over a fallen trunk, but a limb jutting from the bark snagged the student’s boot, dropping her to the ground. Leaves festooned her locks, and she sprang up, not slowing her pace through the overgrowth.

Emmanuel felt like a tightly wound spring ready to bounce away as he fought the manic urge to follow her while rallying the others.

Hannah stumbled into bushes where thorns sliced through her shirt, drawing blood.

She trembled, trying to plod away, but a few thorns and branches held her tight.

Emmanuel fired his last three bullets to cover the student.

Lance yanked her free, and the friends ran, just missing the claws from a utahraptor that pounced where they’d stood.

A roar exploded from deep within the forest, the voice to an impending doom that had yet to fully reveal itself. Whatever had screeched, it sounded much bigger than a raptor.

The T-rex! A shudder slid through Emmanuel that drove him forward, faster and faster.

But something blocked the way.

A raptor’s retractable claws tapped the mud. Nails the size of meat hooks hung forward on prehensile hands. A serpentine neck supporting a large head with eyes glowing red in the sun, and a long muzzle filled with razor-sharp teeth completed the nightmare.

Everyone skidded to a stop as hoots and screeches hung in the air.

Emmanuel attempted to retreat, but the raptors sliced through the vegetation and closed in from all sides.

There was no escape. They were trapped.

The group huddled shoulder-to-shoulder in a rough circle, backs to the center, and they faced outwards toward the foliage.

Scar cocked her head at Hannah, blood dripping from the woman’s arm where the thorns scratched her. Then the beast leapt.

Author Bio:
Chris Liberty was born in Minnesota in 1972. He always had a love for creative arts and was bitten by the artistic bug at a very young age. He discovered his love for writing in his late 20s, writing short stories that he shared with family and friends.

His writing preference is paranormal, horror, action adventure, and mystery.